Citation written by Prof Graham Heaslip, Head of the GMIT School of Business (read by Deirdre Lusby) at the GMIT Conferrings, Friday 17 November 2017

President of GMIT, honoured guests, ladies and gentlemen, an honorary fellowship is the highest honour that GMIT can confer. It is therefore a great honour for me to be invited to read this citation for Mr Pat McDonagh, a businessman, innovator and entrepreneur of great distinction.

Pat McDonagh is a self-made entrepreneur. Initially Pat followed in his mother’s footsteps and became a primary school teacher eventually becoming principal at Kilrickle National School in Loughrea.  Pat has always had a compulsion to try and do things, and to try different things.

In 1978 Pat left teaching to use his entrepreneurial talents and developed what has become the largest restaurant chain in Ireland, Supermacs. Pat is the managing director/CEO and owner of Supermac’s Ireland. The Supermac group is more than the 105 nationwide outlets, it also includes hotels, pubs and restaurants in Ireland and the US. Pat’s success at business has been, in large measure, due to his vision, his determination, and his ability to motivate and bring people with him on an extraordinary successful journey.

Pat is a strong supporter of local communities through employment and sponsorship of sport and community projects at all levels. Pat has employed and continues to employ many graduates and students of GMIT, across all his businesses. As a qualified teacher himself, he recognises the importance of the combination of education and work experience as a path to a career and believes strongly in the marriage of both.

Pat is also a strong supporter of charities and of the Arts in Ireland. Supermac’s currently sponsors 114 sports teams, arts organisations and charities throughout the country.

As a great supporter of all things local, Pat McDonagh has always supported the efforts of GMIT and local Schools, whether it be sponsorship of an event or involvement as a speaker, his dedication to his own local area and what he can do to improve it has become synonymous with him. His greatest link to GMIT is through employment of students and graduates, indeed all of his HR team have been through the GMIT BA in Human Resource Management Degree course over the years.

Pat has been a quiet and effective mentor to many small business owners in the community without seeking any publicity. He has provided many motivational talks to students, and professional organisations over the years.

President, I present to you Mr Pat McDonagh, an exemplary businessman, entrepreneur, leader and communicator, and request you to confer him with the highest honour of the Institute and admit him as an Honorary Fellow. 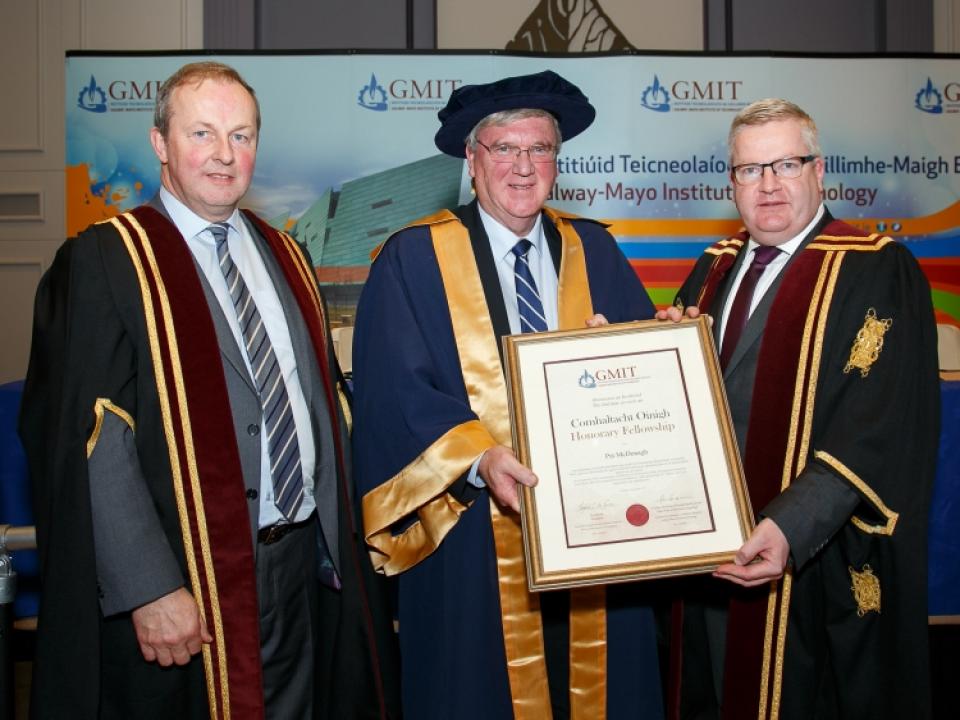