Two GMIT Engineering students have taken joint first place in the final of the national Intel Galileo 3rd level Technology Competition which took place at the Science Gallery in Dublin on Friday, 8 April. The competition, which has been running since the beginning of January, is open to all third level undergraduate students on the island of Ireland.

The competition invited students to create projects based on the Irish-designed Intel Galileo board.  The Intel® Galileo board is the first in a family of Arduino - certified development and prototyping boards based on Intel architecture and specifically designed for makers, students, educators, and DIY electronics enthusiasts.

Colin’s G-Tune is an automatic tuner for guitarists. It works by sampling incoming plucked strings, running a fast Fourier transform, finding the fundamental of the sampled waveform and using that data to turn motors (via PWM) in the correct direction. Once the appropriate pitch is achieved the motors stop. A user will use an app to communicate back and forth with the Galileo. The app allows a user to select what string and what pitch he/she would like to tune to.

David’s Tech Smart Home automates the control of many aspects of the home, including heating, lighting and security systems, to give an interactive user experience. At the heart of this project is the Intel Galileo which runs a webserver, giving the user full control of their home. The Galileo communicates with many subsystems using I2C, each controlling a separate feature of the home. Many hardware and software elements have been integrated to deliver this project.

Four of the eight finalists in the national competition were GMIT students; Ronan Watkins from Birr

The eight finalists were vying for a top prize of €1000, with projects judged by representatives from Intel who selected two projects as overall winners such was the high level of competition.

The overall prize was presented by Denis Dempsey, Director of Operations for IoT Quark at Intel, who said “What I saw here today was a fascinating mix of the potential of smart connected intelligent devices being applied to precision agriculture, musical note analysis and smart home appliances”.

Natasha Rohan and Michelle Lynch, GMIT lecturers at the Department of Electronic & Electrical Engineering, say “taking part in the Intel competition has been a fantastic experience for GMIT students, and a great opportunity to develop and demonstrate their skills”.

To spur innovation across the entire computing spectrum, Intel provided 50,000 Galileo boards to universities worldwide and throughout 2014. Almost 1000 boards were provided to 21 different institutions across Ireland who have been integrating them into upcoming curriculum plans and using the boards for a variety of research projects.

This year’s Galileo Technology competition was the second opportunity for students to showcase the projects that they have been creating with the Galileo board and the standard was very high.

Following the first round of the competition, which involved students submitting their project ideas and a short video summary online, a shortlist of finalist projects was selected. The eight finalist projects came together on 8 April for a special showcase judged by three senior staff from Intel’s Internet of Things group.

The eight finalist projects were:

The CMS (Cereal Monitoring System), which is programmed with the Intel Galileo Gen 2 gathers data from farming crops such a barley, oats and wheat. The goal of project is to make this system into a working prototype that will record data such as temperature of soil and air over the GSM network, and store this data on the SD card providing critical data to farmers who can make decisions on how to manage their crop.

The car can be controlled by a website or an Android app. The website was developed using Node.js and the android app was developed with Processing. The smartphone has control over the movements of the car, with the integrated accelerometer on the phone being used to control the steering of the car which uses a servo motor for more precise steering than a DC motor. The Galileo sends data from a temperature sensor, ultrasonic sensor and light dependent resistor to the smartphone and website and the user can then command the Galileo to post this data to Twitter. The car has a camera attached to it which streams to the website and can be instructed by the user to take pictures and save them to the SD card located on the Galileo and post them to Twitter using Twython, the Python wrapper to interface with the Twitter API.

G-Tune by Collin Gill from GMIT

This project is an automatic tuner for guitarists. It works by sampling incoming plucked strings, running a fast Fourier transform, finding the fundamental of the sampled waveform and uses that data to turn motors (via PWM) in the correct direction. Once the appropriate pitch is achieved the motors stop. A user will use an app to communicate back and forth with Galileo. The app will allow user to select what string he/she would like to tune and also what pitch he/she wants to tune too.

The goal is to automate the control of many aspects of the home, including heating, lighting and security systems, and to give an interactive user experience. At the heart of this project is the Intel Galileo Gen 2 which runs a webserver giving the user full control of their home. The Galileo communicates with many subsystems using I2C, each controlling a separate feature of the home. Many hardware and software elements have been integrated to deliver this project.

P.E.S. by WAI HONG KEET from Dundalk IT

P.E.S system is an early warning system that allowed users to detect temperature changes, the range of the fire, carbon monoxide (smoke) level to prevent fire occurrence. All of the data were uploaded to ThingSpeak, an online platform for the users to access and able to documented them as a record when the incident happened. A voice module was installed in the system to warn the user if the user was still in the affected area during the incident.

Plants need nurturing by YIPENG SHEN from Carlow IT

Plants need nurturing – but sometimes due to our busy lifestyles, we often forget about them!  So this project could solve this issue. The Flower PIOT could download current time and upload the current soil moisture and temperature to the cloud.

There are two indicators on the screen. One indicator shows the current time and the second shows the soil moisture, temperature and the status of flower.

A smartphone could display those value, so let you know what the status of the flower.

When the flower doesn't have enough water, the red LED would be turn on and an E-mail would be sent to your mail automatically to remind you to watering.

This project can appliance at Greenhouses, House plants and Agriculture (for monitoring crops).

This project evaluates the security aspects of an IoT configuration using a Genuino 101, an Intel Galileo and node-RED. The Genuino 101 acts as a peripheral device and sends an advertisement when a sensor is triggered. The Intel Galileo behaves as the central device and scans for advertisements. When an advertisement is discovered it connects to the peripheral, reads the information and sends it to the cloud. A node-der server is used to retrieve data from the Galileo, process the data and then send it out to the peripheral device. The end device receives a notification via Twitter from the cloud and a security investigation of the entire communication process is carried out.

This is a smart fridge using rfid tags. The fridge has multiple sensors that detect temperature, light, weight and rfid tags. The device sits on the top of the fridge, if the fridge opens the light sensor gets a value and triggers more code to be executes such as the scanner being activated. After a second scan happens the fridge logs the current weight and compares it to when it was opened in order to calculate the weight of an item. If no other item is scanned and the fridge is closed we assign the difference between the last fridge weight and the new fridge weight. Once an item is scanned it is stored in a json file and is view able on a web application. The device also send up values through the cloud which is also available on the web application. The web application shows the foods currently in the fridge and assigns a weight value to them based on code that gets executes when scans happen.  Once an item is removed it is removed from the fridge. This project brings the idea of a truly smart home closer and is a reality that one day will be realized.

For further information about programmes in GMIT’s Department of Electronic and Electrical Engineering, see: http://www.gmit.ie/electronic-and-electrical-engineering/department-ele…

Intel is a world leader in computing innovation. The company designs and builds the essential technologies that serve as the foundation for the world’s computing devices. 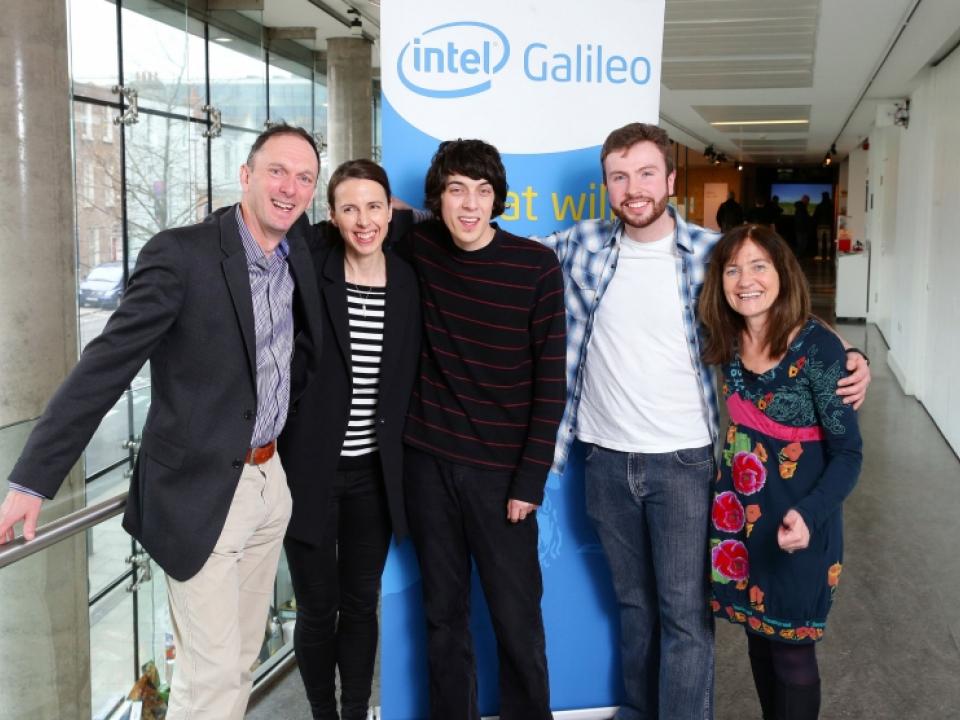 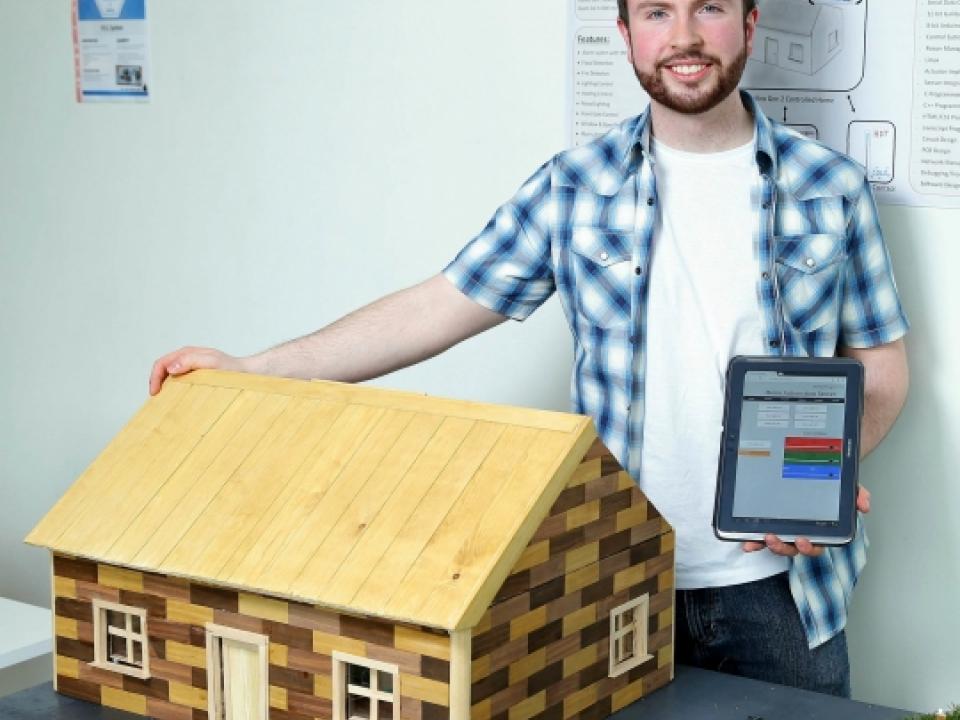 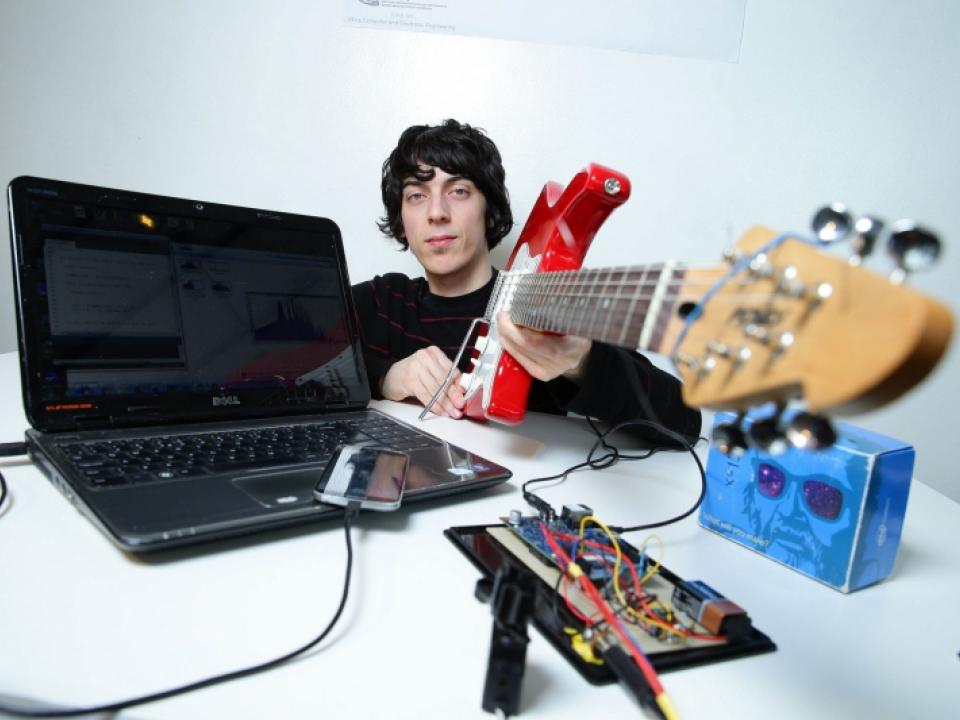