GMIT kicked off its 1916 Centenary programme on Tuesday (8 March) with a lunchtime re-enactment of Éamonn Ceannt’s last statement from Cell 88, Kilmainham Gaol, by local actor Dave Swift. Ceannt was one of seven signatories of the 1916 Proclamation and was executed by firing squad on 8 May, 1916, aged 34.

The vignette is one of over 50 public events in the GMIT 1916-2016 Centenary Programme of Events - Remembering, Reflecting & Reimagining which was formally launched by the President of GMIT, Dr Fergal Barry, at a reception in the college on Monday evening (7 March), attended by GMIT staff and students, representatives of local heritage organisations and the President and Chairman of Liam Mellows GAA club, Paddy Kerans and Brian Keville. The programme extends to all campuses in Galway and Mayo and reaches out to local communities and beyond.

Proclamation Day on Tuesday next, 15 March, features a number of events commencing with ‘This is 1916’, a flagship ceremony (Room 903, Galway campus, 12pm) devised by GMIT’s Dr Mark McCarthy, using words, visuals, music and song to remember and reflect upon the voices, stories and actions of the men and women of Ireland’s 1916 Rising. This is followed by the Reading of the 1916 Proclamation at 1.15pm by an Army officer from Dún Uí Mhaoilíosa Barracks at the Visitor Entrance, Galway campus, and the Raising of the Tricolour by Army officers and playing of the National Anthem at 1.30pm at the Southern Entrance to the campus. A concert ‘Irish Songs of Resistance, Exile and Revolt’ will be performed by soprano Sandra Schaulks and pianist Tom Cullivan in Room 903 from 8pm to 10pm. Admission is free and all are welcome.

The GMIT 1916 Centenary Programme features a wide range of events from public lectures and seminars to musical and cultural performances, scholarships and bursaries, a hurling match, interfaith service, tribute dinner, 1916 artefact & memorabilia exhibition, field trips, and much more.  The full programme can be downloaded from www.gmit.ie/1916

The GMIT 1916 Centenary Scholarship will be launched in November for a new entrant to heritage-related courses in Galway and Mayo, while Galway County Council is also sponsoring a Heritage Studies Alumni Award. The GMIT scholarship, valued at €1,916, will be awarded to a student with the highest points obtained in the 2016 Leaving Certificate. For details on all heritage-related courses, visit www.gmit.ie/courses/all-courses

GMIT’s 1916-2016 Centenary Programme has been coordinated by Dr Mark McCarthy, Lecturer and Programme Chair in Heritage Studies, and author of Ireland’s 1916 Rising: Explorations of History-Making, Commemoration and Heritage in Modern Times.

Dr McCarthy says: “We look forward to welcoming everyone as we embark on this journey of remembrance, reflection and reimagination, and commemorate the centenary of the 1916 Rising in a dignified, pluralist and open-minded fashion. We’re also looking forward to launching a seven-week public lecture series at the end of September, to celebrate 21 years of Heritage Studies education at the Galway campus.”

Gerry O’Neill, Head of the GMIT Department of Heritage and Tourism, says: “We’re delighted to be hosting such an array of events, in the centenary year of the Rising – a seminal event in the development of our country”.

“The institute will also award three bursaries to the winners of the GMIT 1916 Centenary Design & Creative Arts Competition.”

Below are some of the highlights of the first two weeks of the nine month programme:

Tuesday 8 March, 1pm: A native species hedgerow planted at lunchtime and thereafter each day, and a signature tree also planted.

Flagship event, devised by Dr Mark McCarthy, will utilise words, visuals, music and song to remember and reflect up the voices, stories and actions of the men and women of Ireland’s 1916 rising. Includes a short commentary on ‘The Historical Significance of the 1916 Proclamation‘ by Dr Mary Harris, Senior Lecturer in History, NUI Galway, and a member of the Expert Advisory Group on Commemorations, profiles of the 1916 rebels by students and staff of GMIT, and recitals of poetry by Paul Gosling (Department of Heritage and Tourism, GMTI), and Dr Ailbhe Ní Ghearbhuigh (Roinn na Gaeilge, NUI Galway). The ceremony will also feature a range of 1916-themed performances by local musicians, including Frankie Colohan (acoustic guitar and vocals), Carmel Dempsey (keyboards and vocals), Jim Higgins (bodhrán and percussion), Áine Sheridan (harp) and Breda Smith (fiddle and whistles). John Tunney (Department of Heritage and Tourism, GMIT) will deliver the debut public performance of a new song about a leading personality of the Irish revolution.

1.30pm: Raising of the Tricolour & Playing of the National Anthem, Southern Entrance. The Tricolour will be raised by a colour party of Army officers from Dún Uí Mhaoilíosa Barracks.

1.45pm. Gathering. Reception, Café Foyer: Refreshments will be served and live music will be played.

1.45 – 3pm: Reading The Irish Revolution. Café Foyer. A selection of books and pamphlets on the Irish revolution, along with guides on how to trace your family’s history, will be on sale from kennys.ie – Ireland’s largest online bookseller.

8 – 10pm: Irish Songs of Resistance, Exile & Revolt. Join soprano Sandra Schaulks and pianist Tom Cullivan for a special concert. Sandra Schaulks has sung leading soprano roles with Taibhdhearc na Gaillimhe and with several musical societies and choirs. Tom Cullivan is a renowned pianist, who has composed an extensive catalogue of chamber music and several orchestral works. Admission is free and all are welcome. 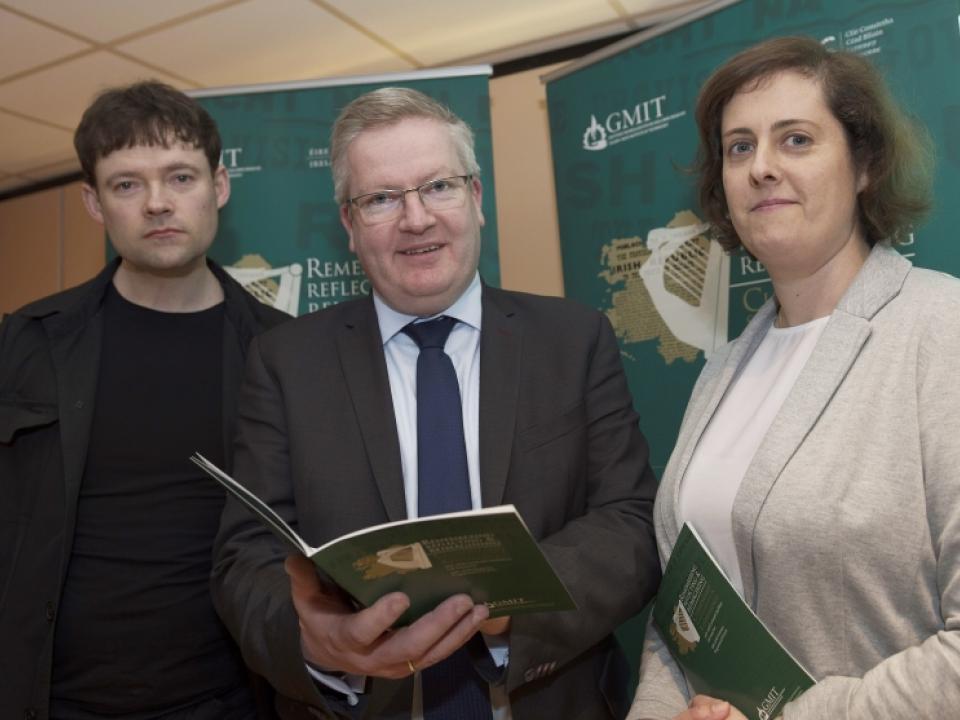 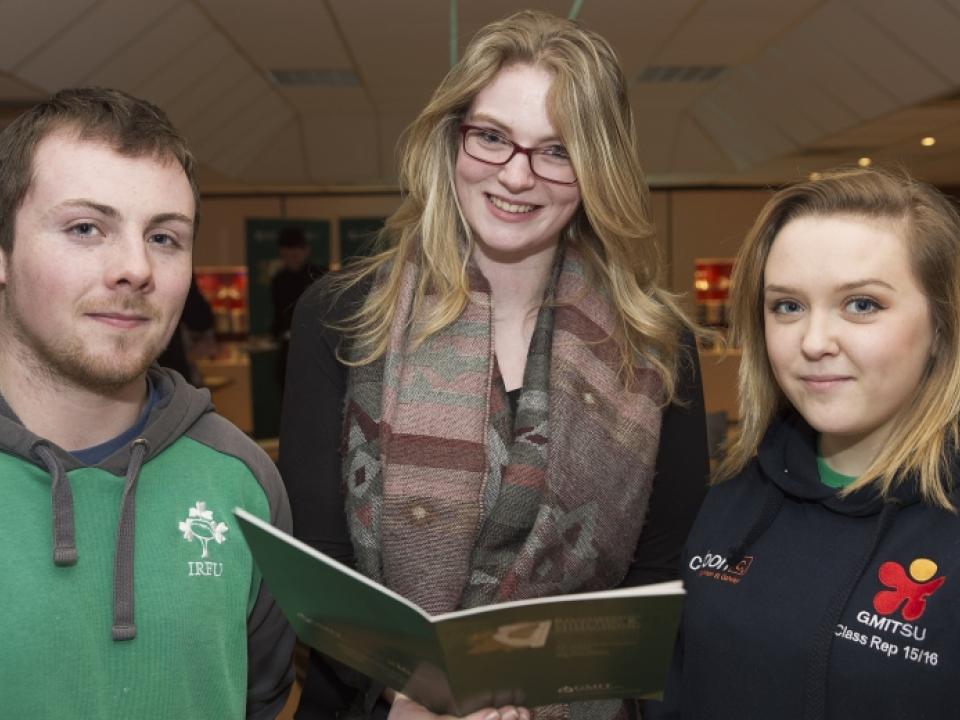 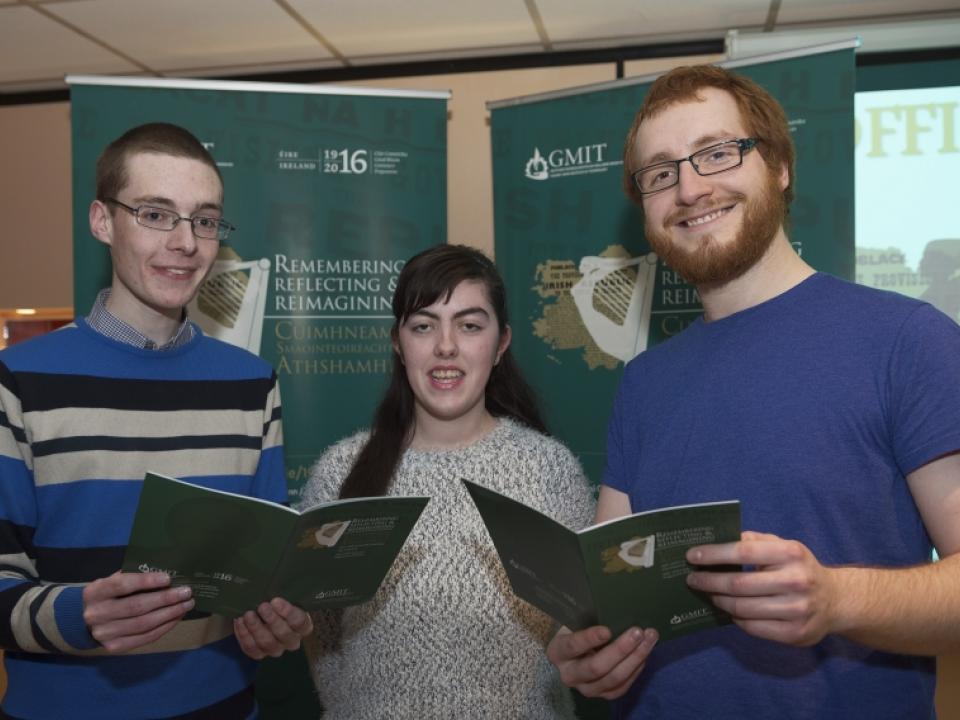 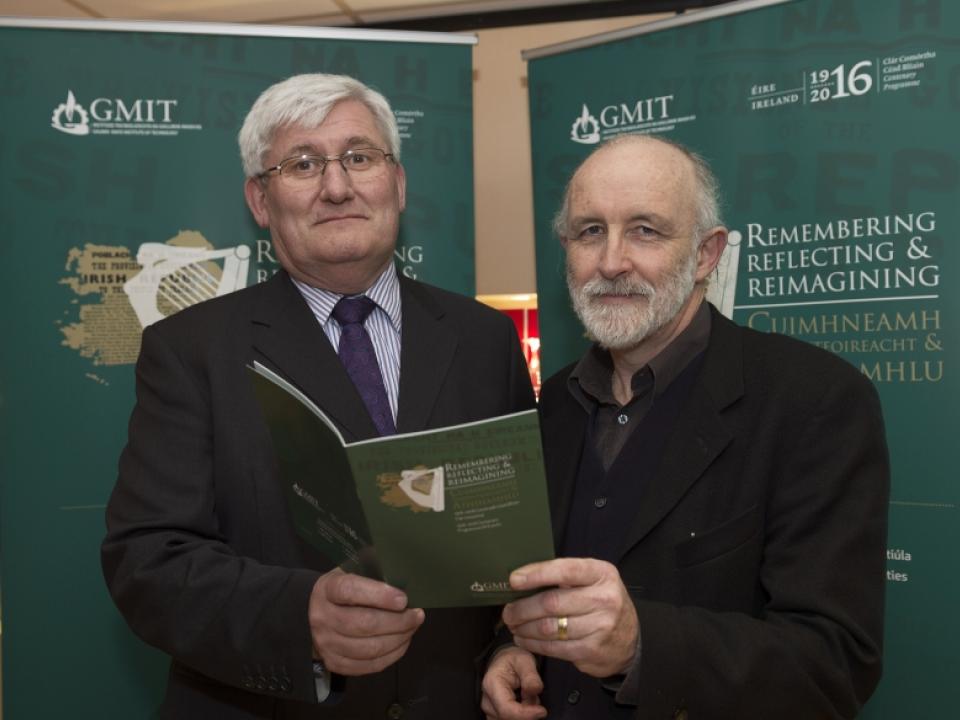 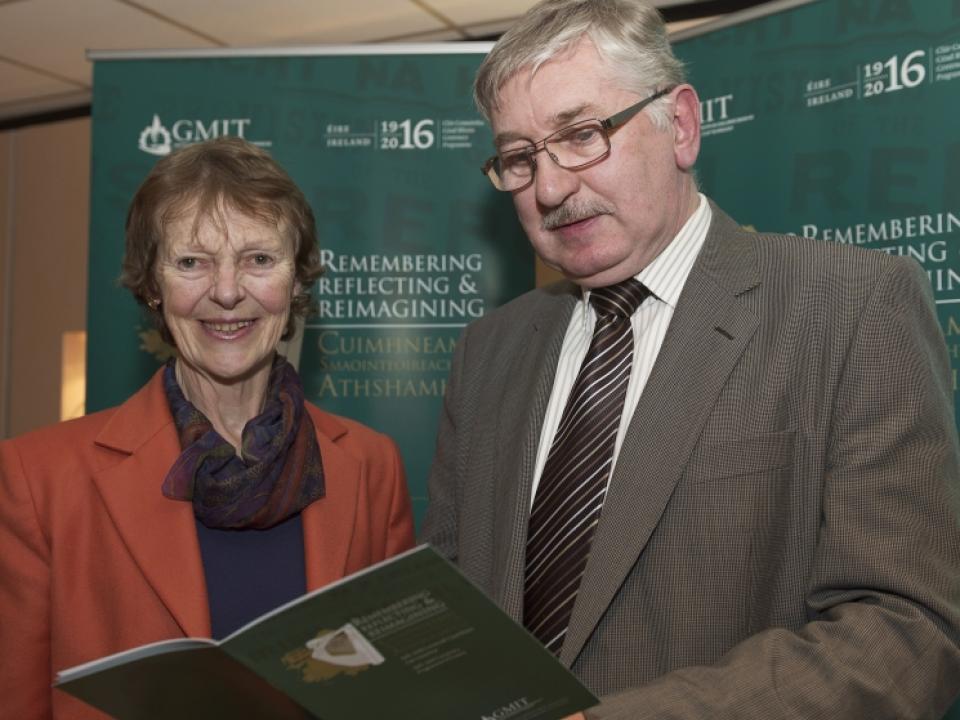 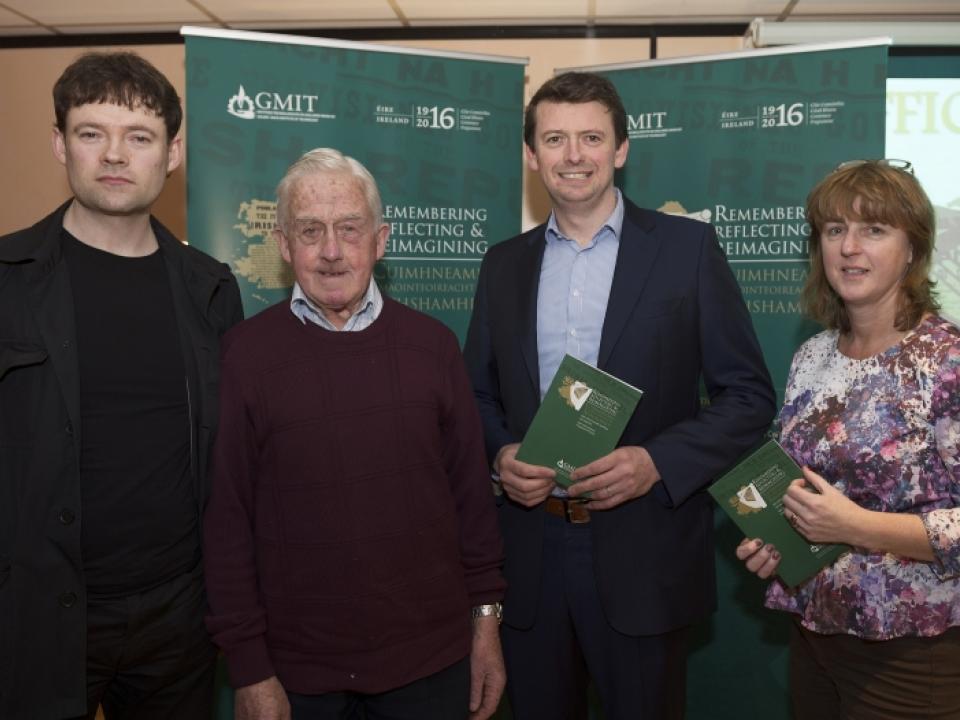 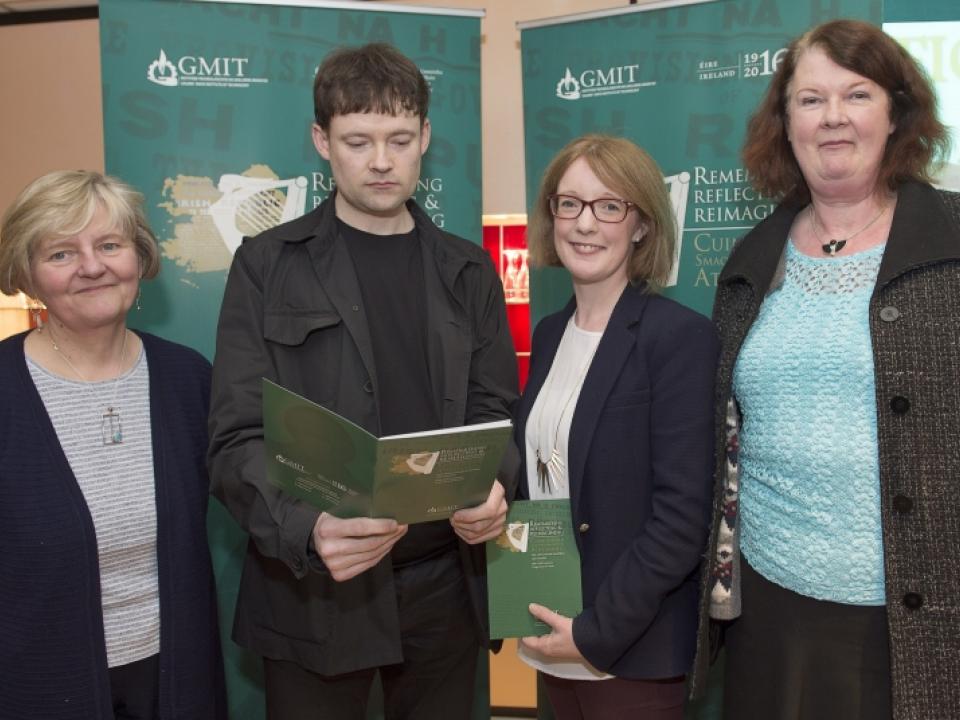 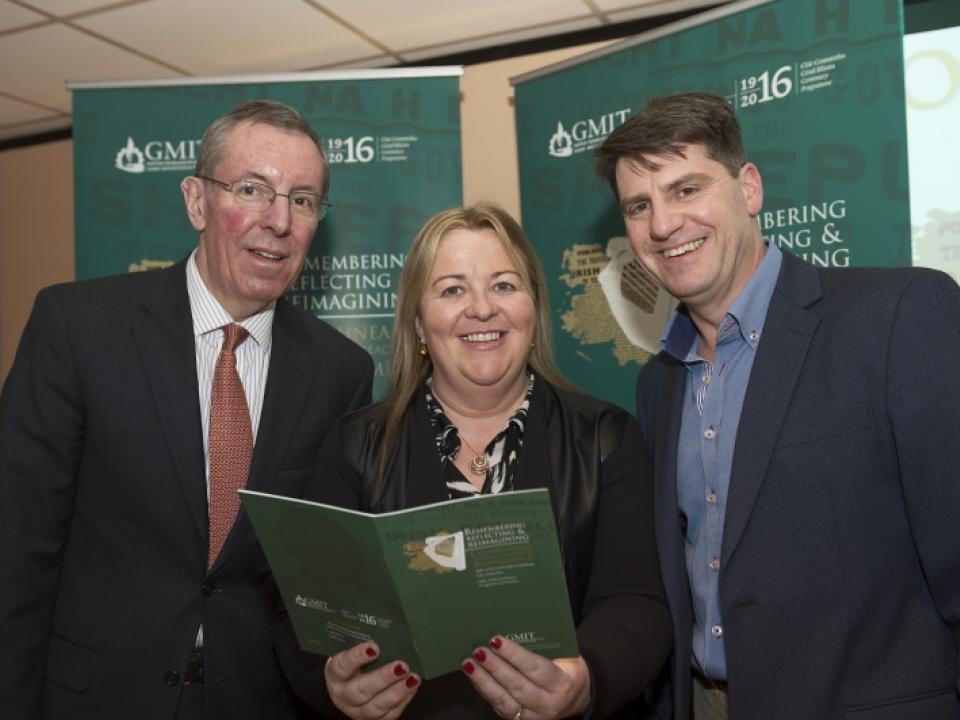 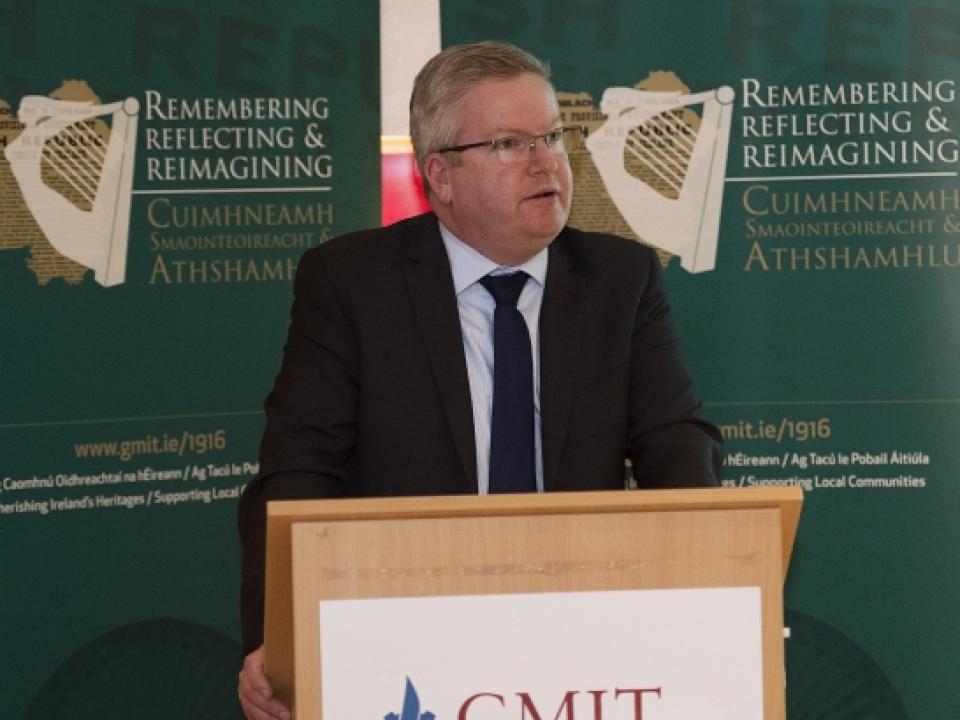