Paul Sweeney wins €2,500 for his product 'WoodBows by Paul'

Bow ties made from wood, a unique product created by a Furniture Design student in GMIT’s Letterfrack campus, has won the top prize of €2,500 in the GMIT Student Innovation Awards Final (2015) which took place in GMIT Mayo this week, Thursday 16 April 2015.

Paul Sweeney from Mountbellew, a fourth year student on the Bachelor of Science (Hons) in Furniture Design and Manufacture, scooped the top prize, sponsored by Shell, for his stunning selection of bow ties which come in a range of hardwoods, complemented by textile design details.  Each bow tie is hand finished and hand stitched by Paul, resulting in a unique product of true originality.

The 24 year old’s business start-up is called Woodbows by Paul. He and three other student teams who competed in the GMIT finals are now through to the national finals of the Enterprise Ireland Student Innovation Awards which take place in Dublin in June.

Each of the eight finalists had to pitch their start up products and ideas before an external panel of experts in the GMIT final, modelled on the national pitch-style EI competition. The panel was comprised of Gillian Slattery of Enterprise Ireland, John Magee, Mayo Local Enterprise Office, and Peter Glynn, former Business Banking Manager, AIB.

Paul came up with the idea two weeks after attending a friend’s wedding (at which he wore a bow tie) when his lecturers set his class the task of designing a product that could be mass manufactured. He put his innovative concept to the test and after some trial and error discovered a bow tie did not affect the neck area with the right design and sizing. Read more about Paul’s product.

“It’s great to have won this prize, for me and for the college, and it’ll also help my business. I got great support from my mentors Finian Sheridan and Jeremy Madden, lecturers in the Letterfrack campus, and Kevin McDonagh, lecturer in Business in the Galway campus.”

Gillian Slattery of Enterprise Ireland, and competition judge, praised the eight finalists and competition organisers, saying: “GMIT and the GMIT Innovation Hubs are true beacons for entrepreneurship in Ireland. Each and every one of these students and team finalists were tenacious, professional and focused throughout the final interview and pitching process. The presentation skills of each and every one of them rivalled the best contestants on the X Factor” she says.

Maria Staunton, Manager of the GMIT Innovation Hub, Mayo Campus and Institute co-ordinator of the Student Innovation Finals says some 62 students and teams entered the competition this year- the highest number ever. They had to submit a short video and business case for their start-up concept/product.  There were entries from each of GMIT’s five campuses with lecturers from all disciplines coming on board as mentors, such as Brian Mulhern, Carmel Brennan, Caroline Clarke, Damien Costello, Finian Sheridan, Gabriel J Costello, Ivan McPhillips, Kevin McDonagh, Michael Gill, Michael Shovelin, Noreen Henry and Shane Moran.

Second prize of €500 went to Business student Lorraine Sotoparra from Foxford for her start up product called Mr Wee, a device that reminds boys to lift the toilet seat when they go to the bathroom and can be used as a training device for younger boys. It is easy to install and remove and can be customized with fun designs for different age groups. Read more about it http://www.pleaselifttheseat.com/

Third prize of €300 went to Michael Hughes from Mervue and Edward Cuddy from Glynsk, both students from the GMIT Mountbellew campus, for their product called Sheep Adoption Crane.  The agriculture product is a unit that hosts up a lamb in a stress-free way.

Fourth prize of €200 went to Dylan Commons from Taylor’s Hill, Galway, for his product Arrow Nav, a free in-Airport Navigation App that helps users navigate their way around busy airports all voer the world. Arrow helps users find the check in desk, boarding gate, and monitor the time it t takes to walk to their departure gates, etc.

The competition was sponsored by Shell,  Enterprise Ireland and GMIT. 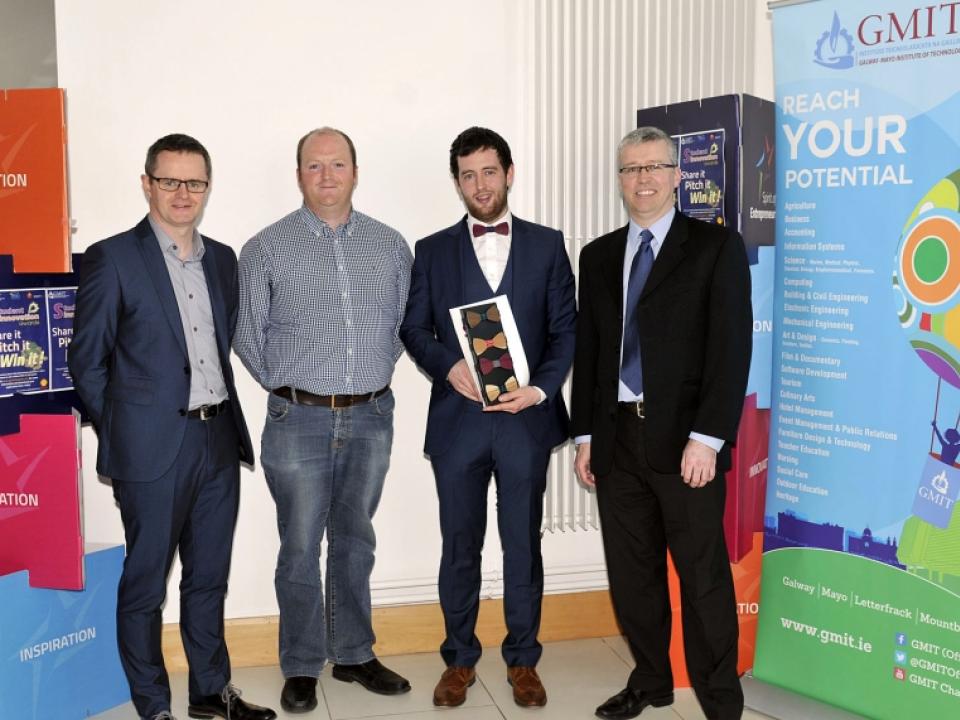