Two outstanding GMIT academics, Dr Mark McCarthy and Dr Mark Kelly, have been awarded the 2016 GMIT President’s Award for Teaching Excellence in recognition of their intellectual and academic achievements and research-informed teaching.

Dr Mark McCarthy, from Cork city, lectures in Heritage Studies in the Dept of Heritage and Tourism, and is Chair of the GMIT 1916-2016 Centenary Programme of Events - Remembering Reflecting & Reimagining.”
Dr Mark Kelly, originally from Renmore and now living in Oranmore, lectures in the GMIT Department of Building & Civil Engineering and is co-Chair of the GMIT Green Campus & Energy Awareness Committee.

The two GMIT academics were presented with their awards by GMIT President, Dr Fergal Barry, at the end of the annual Conferrings of Awards ceremony in the Radisson Hotel, Galway, on Thursday, 17 November 2016. Dr Barry said: "Drs Mark Kelly and Mark McCarthy are exemplar recipients of the President's Award for Teaching Excellence. Both staff are not only excellent teachers, they are engaged in research which is consistent with our mission as a teaching-led research informed Higher Education Institute."

Paying tribute to Dr Mark Kelly, Mary Rogers, Head of Dept, said: “This award is in recognition of Mark’s significant contribution and dedication to students through research-informed teaching within the Department of Building and Civil Engineering and the School of Engineering in GMIT. This has been informed by several funded EPA projects over the past 16 years, which has involved close collaborations with BAM Ireland, Carey Building Contractors, J.J. Rhatigan & Co., Barna Recycling, John Sisk and Son, Scott Tallon Walker Architects and the RPS Group in the areas of construction and demolition waste management, resource efficiency and building information modelling.”

“While working in the construction sector in Galway, Mark became interested in environmental issue, in particular recycling and waste management – topics which continue to spark his interest today. He completed a Masters by Research in 2002, the first Master’s student from the Department, and four years  later, in 2006, Mark was conferred with a PhD in Construction Management, again a first for the Department. Since then he has gone on to complete an M.A. in Academic Practice in NUI, Galway in 2013.”

“Mark’s lecturing career commenced in 2000 in GMIT. He moved to Athlone IT in 2003 and, fortuitously, a year later, we reclaimed him to GMIT as an assistant lecturer.  For the next number of years, Mark quietly pursued his academic research interests, while also supporting both students and staff in the academic teaching environment.”

“Mark is patient, modest, private and a gentleman. He holds high academic standards and is so well respected among his peers that he acts as a catalyst for many innovative strategies to the benefit of the students, academic staff and GMIT.”

“Mark is also a great thinker. He has a reflective approach to teaching and learning, and believes that educators have a responsibility to make a difference to our students, to the environment and to life.
Mark encourages students to become independent critical thinkers through his applied research, flipped classrooms and practical teaching methods. Much of the material for his lectures is drawn directly from his own research AND industry collaborations.”

“Recently Mark led a GMIT/RPS collaboration, in preparing and writing a paper for the Construction IT Alliance National Conference in Dublin. The presented paper outlined the innovative work that is being carried out as a result of this collaboration AND was the overall winner at the conference, beating off stiff competition from Universities in the UK and mainland Europe.”

“Mark is a dedicated and highly professional academic with a thirst for knowledge and a desire to work collaboratively with all of his colleagues. Mark has the motivation and capacity to work with anybody. He can leverage the maximum value out of any initiative, by virtue of his enthusiasm, unassuming selflessness and shared approach.”

Paying tribute to Dr Mark McCarthy, John Tunny, lecturer in the Dept of Heritage and Tourism, said: “Dr Mark McCarthy has made a profound and long-lasting contribution to teaching and learning within GMIT.  He is a long-serving member of the Institute’s Academic Council and has contributed generously to discussions about strategic direction, academic rigour and innovative student assessment.”

“Dr McCarthy serves as programme chair of the BA in Heritage Studies (level 8) on the Galway campus.  In this role he was at the centre of the recent redesign of the Heritage Studies programmes, leading a careful reflection on how the discipline is evolving internationally, how the wide range of elements that make up Heritage Studies at GMIT should best be dovetailed, how new modules should be introduced, and how core content could be delivered in new more effective ways.”

“Even in a department that is academically active and heavily involved in practice-based work involving various cultural groups and local communities, Mark’s record of on-going research, publications, and of lectures delivered at national and international conferences is second to none.”

“Since his arrival on the Galway campus he has forged a reputation for academic excellence and research leadership amongst his colleagues. Moreover, his research feeds directly into many of the undergraduate modules on which he teaches – including Modern Irish History, Local History & Genealogy, and Imagining Ireland – as well into his supervision of post-graduate students both at Masters and PhD level.  His support for a wide range of students – diverse in age, socioeconomic background and nationality, has long been recognised by GMIT’s Heritage students.”

“Mark’s publications record is impressive.  Ireland’s Heritage: Critical Perspectives on Memory and Identity (2005), which he edited, broke new ground in the whole area of memory and Irish Identity. However, his seminal work on the memorialisation of the 1916 Rising is a milestone in Irish Heritage Studies. Described by Guy Beiner of the Ben Gurion University of the Negev as being ‘rich in details that offer insights into the historical construction of national heritage’ Ireland’s 1916 Rising: Explorations of History-making, Commemoration & Heritage in Modern Times (2012) set the scene for much of the commemoration that took place since its publication.   His book is the culmination of years of fieldwork and archival research in Ireland and overseas. It breaks new ground by drawing together the interlocking dimensions of history-making, commemoration and heritage to reveal the 1916 Rising’s undeniable influence upon modern Ireland’s evolution, both instantaneous and long-term.”

“Mark has used the deep store of knowledge that he uncovered when writing this book to work with local community groups and local government interests throughout Galway city and county to enrich their 2016 centenary celebrations.  He was also the engine behind GMIT’s 1916-2016 Centenary Programme of Events – Remembering, Reflecting & Reimagining – which by the end of the year will have featured 50 public events.”

“Mark’s approach, involving a combination of academic excellence and applied community-based heritage practice, allows his students to see close up the connection between academia and the real world.  They learn from him that heritage is not just taught in the class room, the tutorial group, on site visits or in fieldwork projects, but that it reaches into and helps define communities and institutions the length and breadth of Ireland. In many cases these are the very communities and institutions in which these same students will on graduation hope to gain employment”. 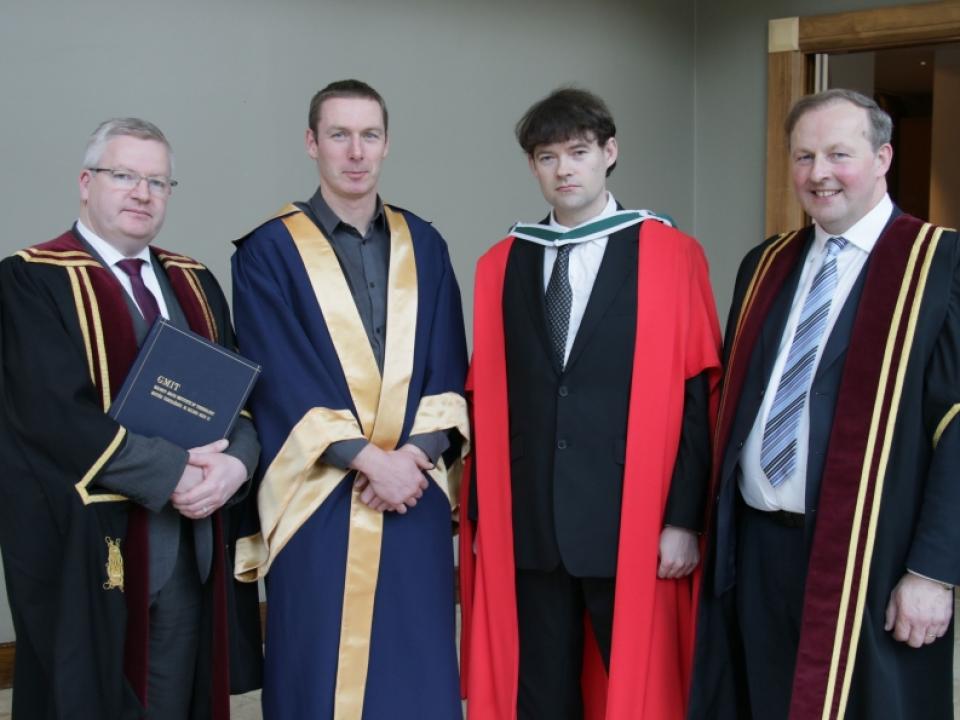 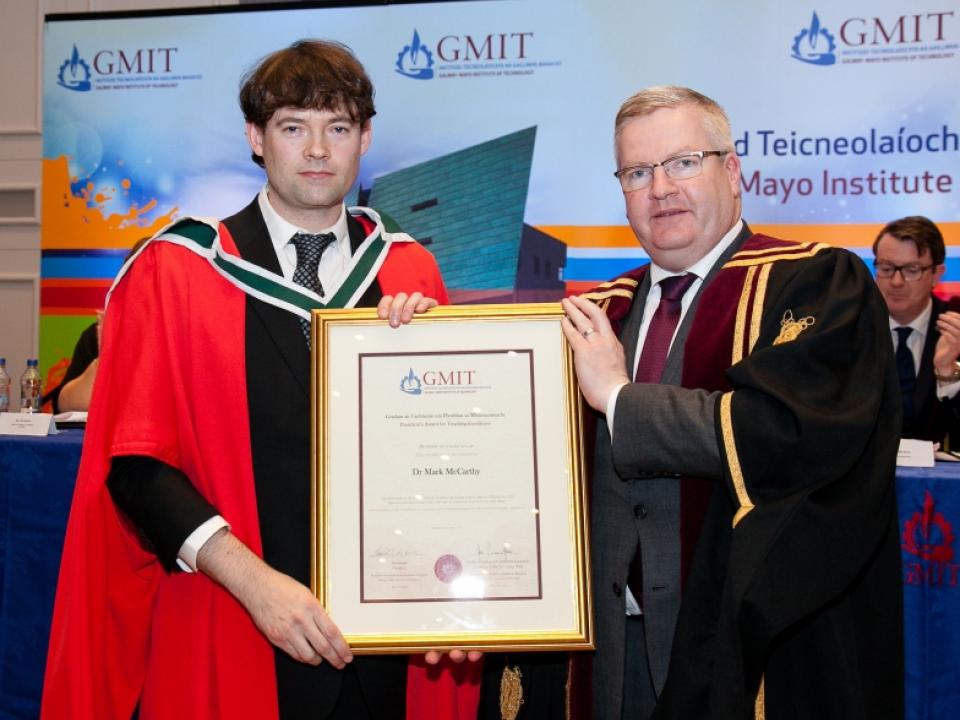 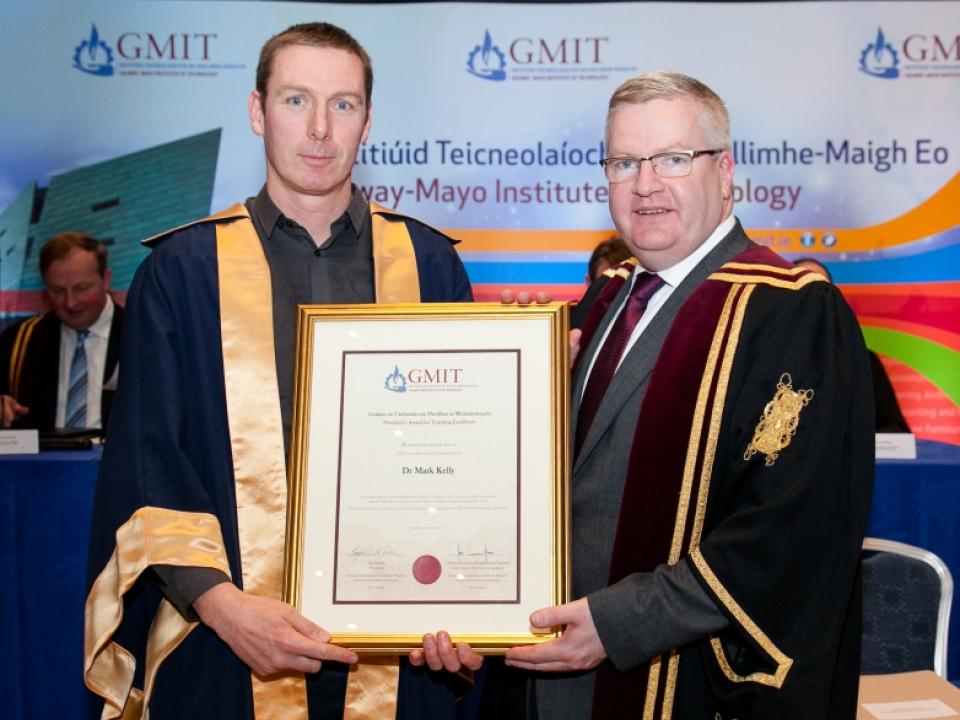