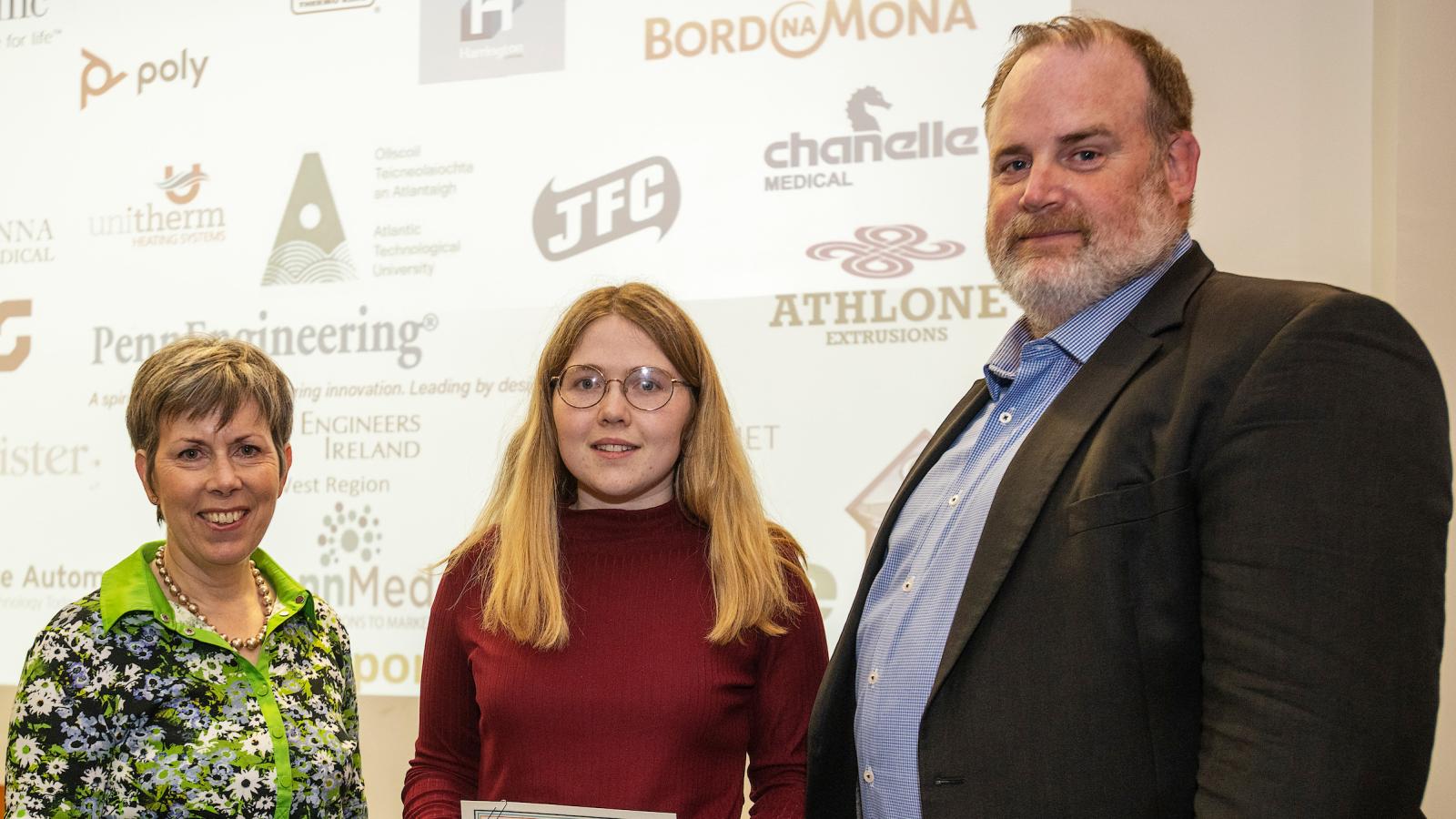 Áine, from Castlepollard, Co Westmeath, was of one of 80 students who exhibited final year posters which were critiqued and judged by 22 industry representatives at a formal event on campus on 27 April.

Describing her project, Áine says: “An endosteal implant is a type of dental implant that’s put into your jawbone as an artificial root to hold a replacement tooth, and the basic idea behind my project is to determine a suitable type of implant that would be considered more porous, like that of the bone matrix. To achieve this, I assumed that the only variable which is different in the centre of the implant is its cellular solid shape. The porosity of the four cellular solids was roughly 70%, compared to trabecular bones' porosity of 80%, with the permissible gap width for osteointegration to occur. The implants had a young’s Modulus of 20GPa, the same as trabecular bone to prevent stress shielding.”

Student Adam Quigley from Newbliss, Co Monaghan, won the Agricultural Engineering award for “The Design of a Push Feeder Attached to a Kennan Mechfiber 350 Diet Feeder”. “Over the past two decades animals have gone from being fed silage and meal separately to getting a Total Mixed Ration (TMR) which they tend to push away from the feeding barrier. For my project I designed and manufactured a hydraulic implement which could be attached to the feeder, which could push or pull the TMR towards the barrier.” he explains.

Student Aidan Doohan from Dunmore, Co Galway, won the Biomedical Engineering award for “The modification of a 3D Printer for the Purpose of Bioprinting”. “3D bioprinting has become a powerful and versatile tool in the Biomedical sector, however the technology is extremely expensive. The aim of my project was to investigate the feasibility of making a cost-effective modification to a generic 3D printer which would allow it to extrude bio-inks under controlled conditions,” he says.

Shaun Burke from Ballyhaunis, Co Roscommon, Manufacturing Engineering Design winner for “The Design, Analysis and Manufacture of a Prototype Eddie Current Kart Engine Dynamometer”, says: “I engineered, designed and analysed the output of a prototype Eddy Current dynamometer which was used to measure the performance of a 125cc high kart engine. To achieve this, I used the Engineering Design Process, Solidworks and CNC manufacturing to manufacture a dynamometer bed.”

In the Mechanical Engineering programme, Adam Hardy from Foxford, Co Mayo, won the Biomedical specialisation award for his work on a “Mechanical Reject Detection System for a Catheter Punching Process”; James Neilan from Gort won the Energy specialisation award for “Evaluation of the Effectiveness of Heat Recovery Ventilation in Reducing ATU Galway Campus Indoor CO2 Levels and Mitigating the Risk of COVID”; Mark Jennings from Shrule, Co Mayo, won the Design specialisation category for “Quick Hitch System for a 3 Point Linkage for a Tractor.”  Ryan McGovern from Clangevlin, Co Cavan, Dylan Murphy from Killygarry, Co Cavan, and Conor McKeogh from Raharney, Co Westmeath, won the Manufacturing specialisation award for “The Design, Manufacture and Programming of an Automated Microplastic Injection Moulding Machine”. Conor says “We all worked collaboratively to deliver the project, but each had our own milestones and deliverables.  I researched, developed and implemented the wiring diagram and the ladder logic that was used by the PLC to control and automate the system.”

Professor Graham Heaslip, Head of the Engineering School, says, “Engineering requires an ability to think outside the box and visualize several alternative solutions and scenarios. The exhibition demonstrates that innovation and enterprise engagement is core to ATU Engineering. The diversity of projects demonstrates creativity, knowledge, and ingenuity by each student.  The success of the exhibition relies on our industry partners, who act as our judging panel and assess the talent being developed in ATU. Thank you to the academic staff who acted as mentors and provided encouragement to all the entries.”

Organised by the ATU Dept of Mechanical and Industrial Engineering in collaboration with the Innovation Hub (iHub), the competition was adjudicated by 22 industry representatives.

Dr Oliver Mulryan, Head of Department and event organiser, paid tribute to the company representatives who give generously of their time, advice and guidance each year, and who sponsor the various category awards. “It is the fifth year of the event, and it’s great to have it back onsite again and see our students engage so well with local industry representatives and bodies. These experiences will hopefully stand to them in their professional journeys and careers. This end of year competition is an important event in our academic calendar, giving us opportunities to reconnect and strengthen our links with industry who continually support and enhance the learning of our engineering students. Your support is greatly appreciated!” 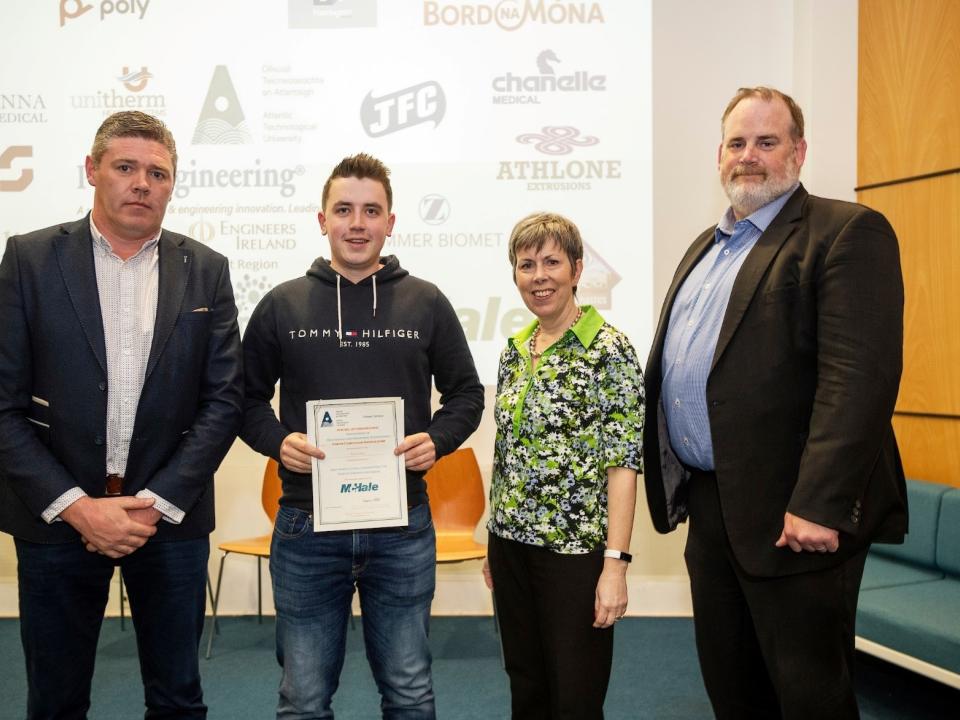 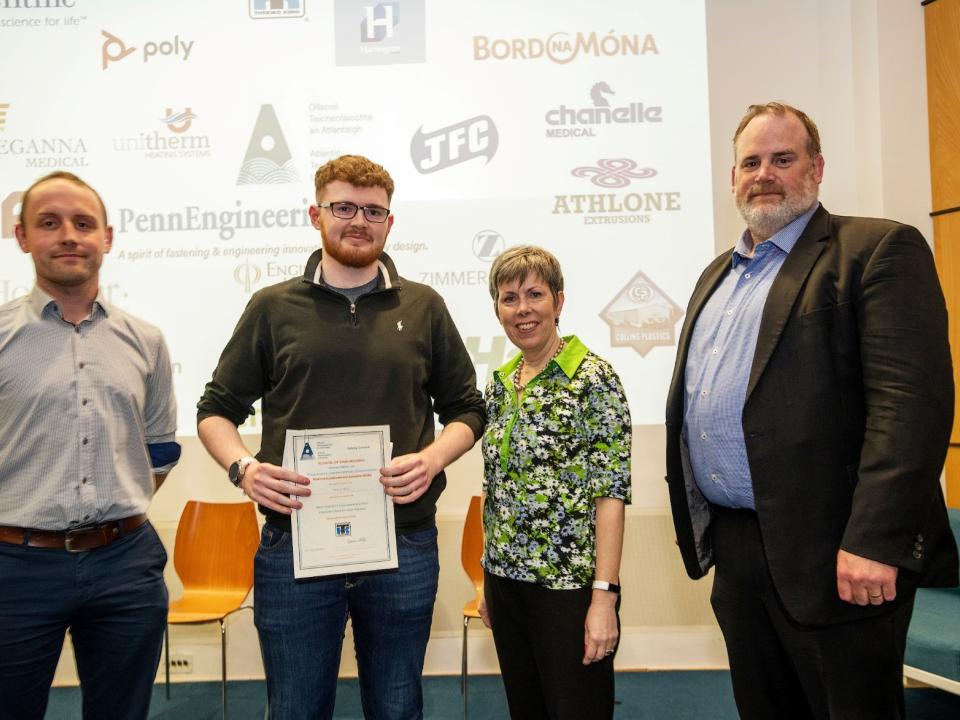 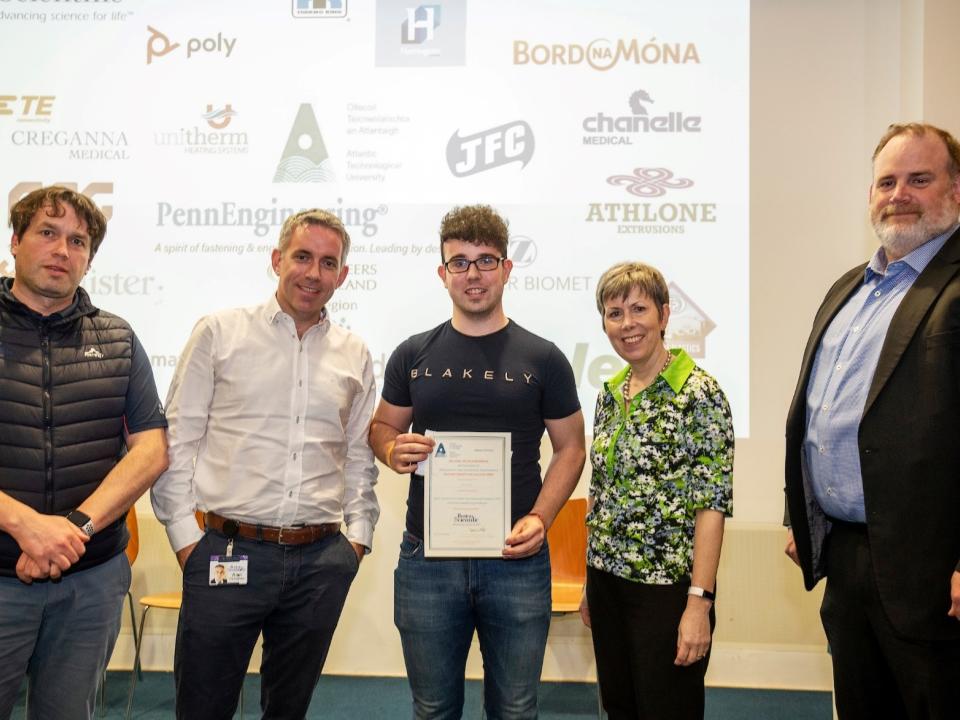 Judges’ comments
Dr William Finnegan, Chartered Engineer, Engineers Ireland West, says “I thought the quality of the work on display was excellent. The winning project in each category, along with the overall winner, were at a standard well above that expected for a final year project. I'd like to congratulate all of the students, and their supervisors, on an excellent display of engineering.”

Alan Heneghan, Production Unit Manager, Boston Scientific, says “The Engineering Exhibition of the final year student project is an excellent showcase for both the students and for the ATU and their lecturers. The standard of projects on display and innovative solutions to real problems is truly excellent to see. Well done to all involved.”

Dermot O’Reilly, R&D Senior Manager, Crannmed, says “All the posters were very well laid out, and the some of the top end work displayed was excellent; I can only describe the standard as being very high. I think it is important for all students to complete a project in full as that will help them when it comes to transitioning to industry.”

Dylan Farrell, Mechanical Engineer, Thermo King, says “The work of the students was of a very high quality, with excellent presentations and good engineering capabilities shown; they should all be very proud for what they achieved in the short time for their final year projects.”

Ailish Sweeney says “The Engineering Exhibition was very useful preparation for My Final Year Project Presentation. In addition, I made some useful contacts for possible job opportunities. I enjoyed the Mechanical Engineering programme. One of the most enjoyable parts of the programme was Creative Design and Innovation and Enterprise modules. I enjoyed these modules and cannot praise the lecturer highly enough”

Amy McNulty says “I thought the engineering event was a great opportunity and a very positive day. It was great to get talking to possible employers and employees from the industry. I am very happy with what I have learned on the Agricultural Engineering degree, it is what I had imagined going into the course. I wanted to have the ability to improve and design agricultural machinery. A bonus is the Level 6 Advanced Certificate in Agriculture which works well with the engineering course.  I thoroughly enjoyed my Final Year Project”

Oisin O’Cualain says “The engineering event is a great way to see what everyone has been up to during the year and give a great way to show the hard work done throughout the final year. Manufacturing Engineering & Design is a great course to get a mix of all types of engineering as it allows you to study modules from mechanical, biomedical, and energy engineering during the program. The longer internship duration allows you to gain more industrial experience which strengthens your ability to gain work after college.” 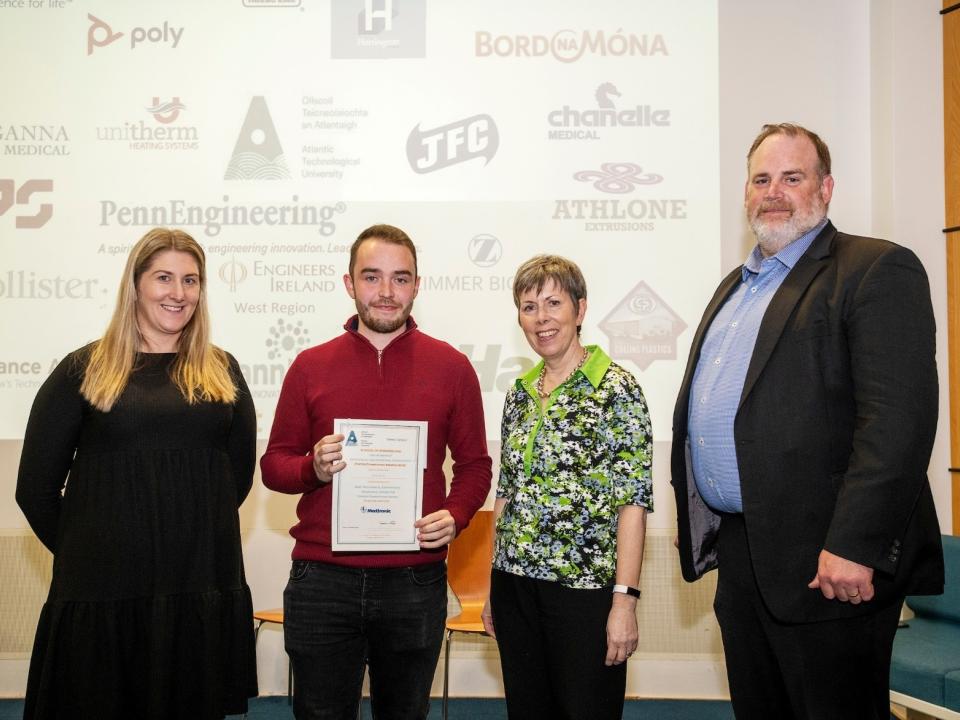