Galway-Mayo Institute of Technology (GMIT) has awarded Honorary Fellowships to three outstanding individuals for their contribution to their communities and to regional development in the west; Donagh O’Donoghue, Galway city, Matt Molloy, Ballaghadereen, Co Roscommon and Westport, Co Mayo, and Michael O’Neill, Tully, Renvyle, were presented with their Hononary Fellowships by GMIT President Dr Fergal Barry at the recent GMIT Conferring Ceremonies in Galway and Mayo.

Speaking at the Conferring of the Honorary Fellowship Awards, GMIT President, Dr Fergal Barry, said: “Fellowships are the greatest honour that an Institute of Technology can bestow. Dr Donagh O’Donoghue, Michael O Neill and Matt Molloy are truly wonderful role models for our students and graduates to emulate in the areas of business, community and culture respectively.”

Donagh O’Donoghue served as a member of the GMIT Governing Body from 1993 to 2015, volunteering a considerable amount of his time and energy to the development and growth of the Institute. A prominent member of the Galway Business Community in a career that has spanned five decades, he became group managing director of Thomas McDonagh & Sons Ltd in 1975, an office he held until his retirement in 2000.  During his stewardship he demonstrated considerable business acumen through the expansion of the company and diversification of its business units.

Donagh O’Donoghue has made a significant contribution to the economic development of the region as a member of council of Galway Chamber and in particular in his role in developing Galway Airport in the 1980s and again in 2013/2014 in ensuring that this strategic asset was retained in public ownership for the benefit of the future economic development of the region. He served for 20 years as Chairman of the Druid Theatre Company and donated the premises on Flood Street, now renamed Druid Lane Theatre, which houses the theatre.  The Druid Theatre Company is generally credited with making Galway one of the premier cultural centres in Ireland.

Michael O’Neill, secretary and founding member of Connemara West, has an unparalleled record and legacy in community activism. He has held the position of Secretary of Muintir Tíre Community Council, Chairman of the Galway County Federation of Community Councils, Founding Director and Treasurer of Tullycross Credit Union, Founding Director & Secretary of Connemara West Development, and Director of Kilkenny Design Workshops, as well as being an elected Member of Galway County Council from 1991 to 1998.

Michael was the Principal of Eagles Nest Primary School in Renvyle for 37 years up to his retirement in 1998. He held the post of Chairman of Galway County Vocational Education Committee and later took on the role of Education Training and Development Services Manager with Connemara West where he works to this day. As secretary and founding director of Connemara West, he has played a pivotal role in acquiring and developing the buildings which accommodate GMIT’s Letterfrack campus, a now recognised National Centre for Excellence in Furniture Design and Technology.

GMIT Letterfrack’s Dermot O’Donovan paid tribute to Mr O’Neill, saying: “Michael has worked tirelessly and selflessly to promote the sustainable development of the North West Connemara area. He was a key driver of nurturing the educational partnership between GMIT and Connemara West that has seen almost 2,000 students graduating from the campus. He was also instrumental, as a Director of Connemara West, in the development of a range of community development projects including Renvyle Thatched Cottages, an Teach Ceoil and more recently the commencement of the Clúid Housing Project in Letterfrack.”

“In promoting culture his passion for keeping alive the traditions of Irish music, dance and storytelling saw him take on the role of producer for the award-winning Seisiún Group for more than 40 years. During this time, he was also a founding member and Chairman of Connemara Community Radio.  In Sport he was the Secretary of Renvyle GAA, Chairman of Renvyle Chomórtas Branch and was the champion for fundraising and development of the all-weather and AstroTurf flood lit pitches in Letterfrack.” adds Mr O’Donovan.

Matt Molloy was born in Ballaghadereen, Co Roscommon into a family with a strong history of traditional music. He describes how he “soaked up music as a child”. His father, grandfather and his uncle played the flute and Matt’s father taught him to play the flute from the age of eight. By the age of 18, he had won the All-Ireland Flute Championship and had a string of successes in National Fleadh Cheoil.

Matt qualified as an engineer and moved to Dublin in the early 1970s to work for the Irish national airline. Throughout the folk scene of the 1970s, he co-founded The Bothy Band with Donal Lunny and they recorded four albums in four years, all highly regarded to this day. It was also at this time he became acquainted with musician Paddy Moloney and was invited to join The Chieftains in 1979, one of two non-Dubliner members of the group. He recorded his first album with the Chieftains called ‘Boil the Breakfast early’ in 1979. After the Bothy Band, Matt appeared briefly with the reformed group, Planxty, with whom he also recorded three albums. He featured on many other albums and was soloist with the Irish Chamber Orchestra on the centrepiece of composer Micheal O Suilleabháin’s album ‘Oileán/Island’.

Matt is probably best known for his membership of the Chieftains, recording 35 different albums and guest appearances on another 24 recordings with various artists. The Chieftains brought Irish music to a world stage and recorded an eclectic mix from China to Nashville. They have also recorded with international performers from different music genres such as James Galway, Van Morrison, Mike Oldfield, Rolling Stones and Carols Nunez, a Galician piper. In 2013, the Council of the Galician Government honoured them with the Castelao Medal which is awarded in recognition of outstanding achievements in art, literature, music, or science. The Chieftains also had the honour of performing live with Canadian Astronaut Cmdr. Chris Hadfield in Houston, TX on 15 February, 2013.  Cmdr. Hadfield performed guitar and vocals on “Moondance” from aboard the International Space Station.

Matt Molloy’s traditional music pub in Westport is very well known in the region and attracts international visitors all year round. Matt once said in an interview “As long as you know you’ve got something to learn, you’ll continue to improve.”  And on Irish music, he says: “It’s just an extension of myself. It’s part of who I am.”

Paying tribute to Matt Molloy at the GMIT Mayo Conferring ceremony, Dr Deirdre Garvey, Head of GMIT Mayo, said: “Matt Molloy has made a national and international contribution to music and we are honoured to have the opportunity to recognise it in this region.” 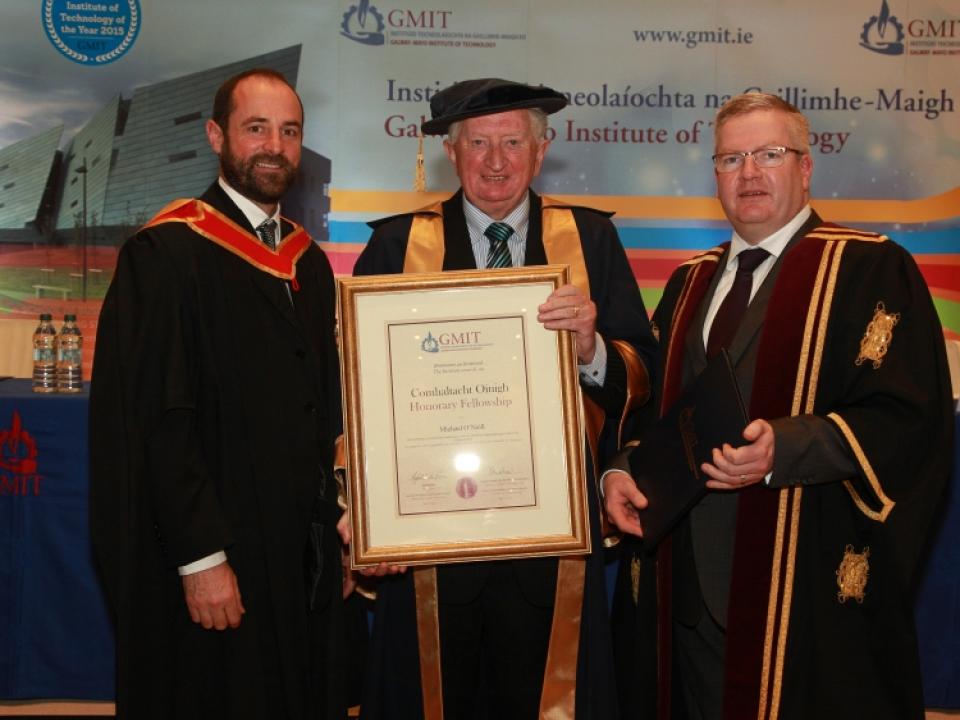 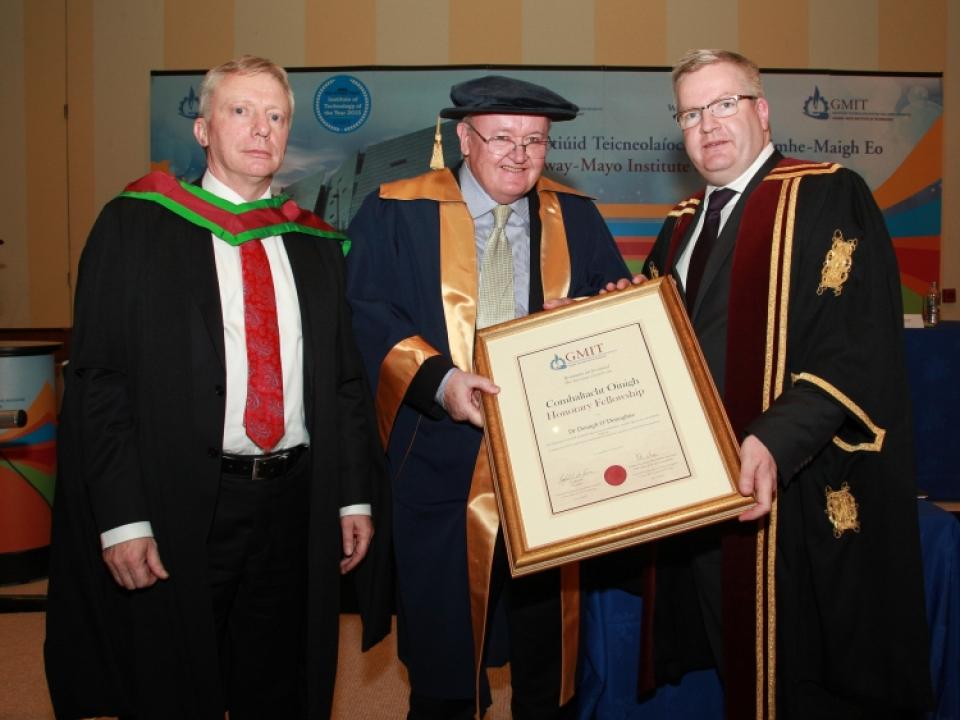 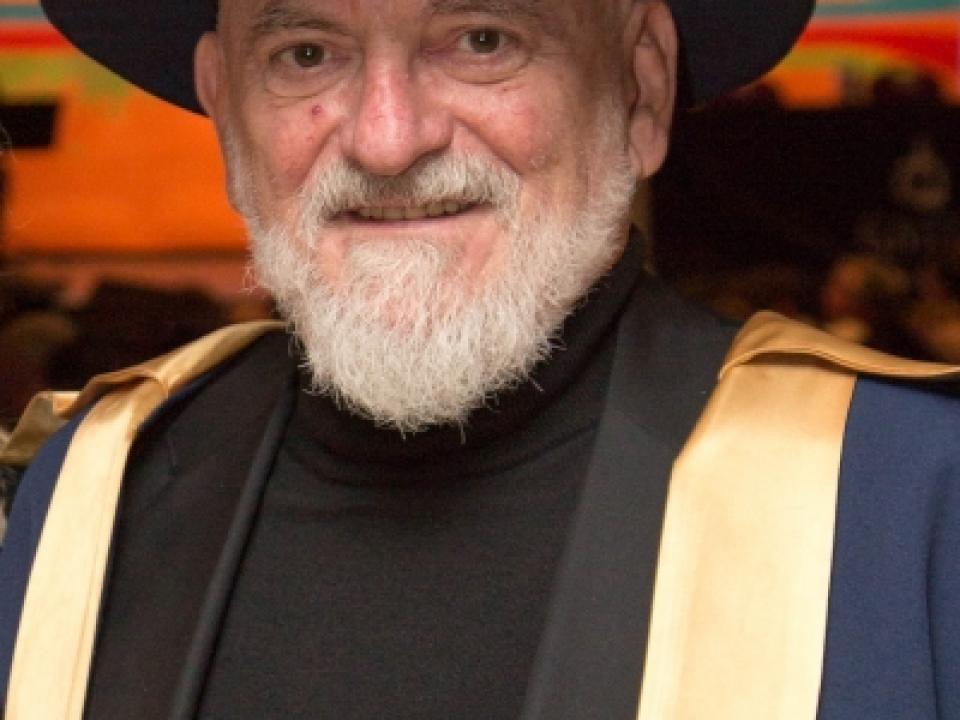